Las Vegas, NV (April 20, 2015) Live Nation, in collaboration with MGM Resorts International, is thrilled to announce the Las Vegas return of hard rock juggernaut Slipknot, invading MGM Resorts Village this August 28th. Slipknot’s “This Summer’s Last Stand” tour with special guests Lamb Of God, Bullet For My Valentine and Motionless In White goes on sale to the general public this Friday, April 24th at 10am PST at www.ticketmaster.com, and all Ticketmaster and MGM box office locations. Pre-sales will begin Tuesday, April 21st via www.slipknot1.com.

.5: The Gray Chapter, Slipknot’s fifth studio album for Roadrunner Records and first since 2008’s RIAA platinum certified chart-topper, All Hope Is Gone made a stunning chart debut upon its October arrival last year, entering the SoundScan/Billboard 200 chart at #1 with sales in excess of 131,000 albums – the highest debut for a hard rock record in 2014. Furthermore, the album made an explosive chart impact around the globe, with #1 debuts in Japan, Australia, Canada, Russia, and Switzerland, alongside top 5 debuts in the United Kingdom, Germany, Ireland, Austria, New Zealand, Mexico, Denmark, and Finland. Furthermore, “Custer,” the group’s latest single from .5: The Gray Chapter is impacting now at rock radio outlets nationwide.

Along with its massive popular success, .5: The Gray Chapter has also proven one of 2014’s most critically acclaimed releases, earning the group their eighth GRAMMY® nomination in the ‘Best Metal Performance’ category for their triumphant return with “The Negative One.” The album was #1 on both Revolver’s “20 Best Albums of 2014” and Guitar World’s “50 Best Albums of 2014” rankings, while also earning inclusion on Rolling Stone and Loudwire’s “20 Best Metal Albums of 2014” rankings. In addition, .5: The Gray Chapter was chosen as Metal Hammer’s “Readers Album of 2014” and included on the “Critic’s Choice: The Metal Hammer Top 50 Albums of 2014” tally. And as if all that weren’t enough, Slipknot’s return to rock action were also named by Rolling Stone as one of the “20 Biggest, Boldest Comebacks of 2014.”
Slipknot emerged at the tail end of the Twentieth Century and quickly established itself as the most enigmatic, provocative, and aggressive collective of the modern era. 1999’s SLIPKNOT stands as a true milestone, named by Metal Hammer as the “Best Debut of the Last 25 Years.” The album fast earned 2x RIAA platinum certification, with each of Slipknot’s following releases – including 4 video albums – all receiving additional platinum certifications in the US and around the globe. All told, the band has 11 platinum and 38 gold record certifications worldwide.

About MGM Resorts International
MGM Resorts International (NYSE: MGM) is one of the world’s leading global hospitality companies, operating a portfolio of destination resort brands including Bellagio, MGM Grand, Mandalay Bay and The Mirage. The Company is in the process of developing MGM National Harbor in Maryland and MGM Springfield in Massachusetts.  The Company also owns 51 percent of MGM China Holdings Limited, which owns the MGM Macau resort and casino and is developing a gaming resort in Cotai, and 50 percent of CityCenter in Las Vegas, which features ARIA Resort & Casino. For more information about MGM Resorts International, visit the Company’s website at www.mgmresorts.com. 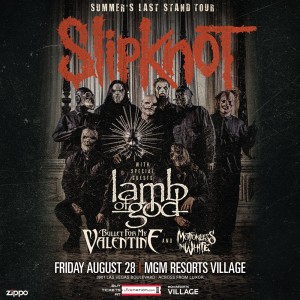 Roger Waters – This Is Not A Drill